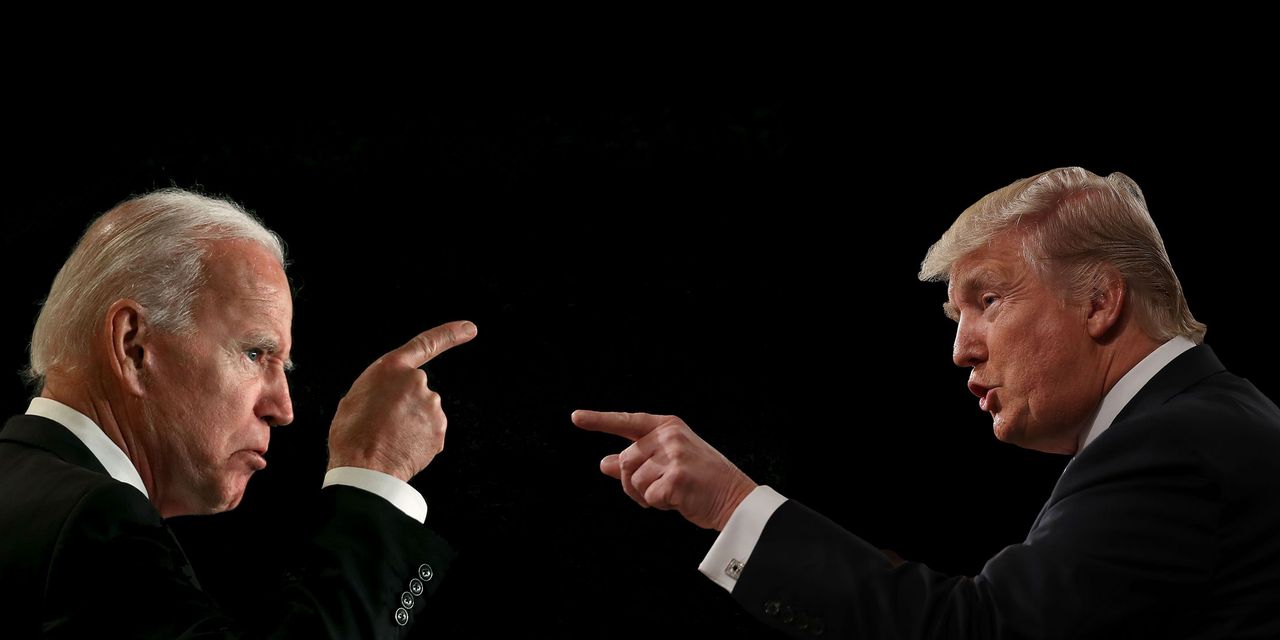 The Matrix Gazette was granted the exclusive opportunity to conduct a Debate via Zoom between President Donald Trump and the presumptive Democratic candidate, Joe Biden.

Donald Trump spoke from the Lincoln Bedroom of the White House and Joe Biden spoke from his basement bunker at his home.

Thank you, President Trump and former Vice President Joe Biden for agreeing to this unprecedented early debate via Zoom. We appreciate your willingness to take the gloves off and duke it out.

Our first question is to President Trump. Mr. President, with your low standing in the national polls, do you still think you have a chance at a second term?

President Trump: You bet! Of course, that all depends on how my opponent steps forward and comes out of his basement bunker to meet the voters. Some of them don’t know if he’s alive or not.

MG: What say you to President Trump’s assertion that you should come out and meet the voters.

Biden: Why, I’d be glad to if only my handlers would let me. But it’s that damn virus thing. My wife won’t let me leave the house. But that’s OK. We’ve got plenty of time to meet the voters. I’ve been at this racket for 47 years! I know voters and they know me.

MG: President Trump, what say you?

Trump: Sleepy Joe has been in politics his whole life. It’s gotten him millions of dollars from his Ukraine deals and God knows what else. He doesn’t care about voters. He cares about making back room deals with his cronies.

Biden: Now wait a cotton-picking minute!… I made a lot more than a couple of million on that Ukraine deal. Plus, my son, Hunter, got a good gig from it. Hell, it’s all part of the deal. You, Mr. President, should know what the art of the deal is…

Trump: Yeh, I do. But I wasn’t in politics like you. I ran a business. Deal making was part of the game. But you, Joe, have been dealing dirty for years in the back rooms of Congress and the White House.

Biden: I was in the White House for 8 years, doing deals for Barack. Hell, I might as well have been President. Got a lot done, we did. Look at the great deal we made with Iran. Sent them a truckload of money. And they gave us something… I forget what it was, but it was important.

Trump: Yeh, that Iran deal was a doozy. Fortunately, I dumped that right away. Too bad we couldn’t get our money back.

MG: Gentlemen… Let’s get back on track. Mr. Biden, what’s your vision for the future of this country?

Trump: I see great things coming down the pike. We’ve got to get the economy back on its feet. And that means getting people back to work. Americans don’t sit around and wait for opportunity. We make it happen.

Biden: Oh… yeh. What were we talking about?

MG: President Trump’s vision vs. yours.

Biden: Thanks. Yes, we’ve both got visions. Mine’s better ‘cause I’ve got a boatload of Democrats chomping at the bit to reclaim our rightful place as rulers of this great land. We’ll make America Great Again when we get rid of Donald Trump.

Trump: Keep dreaming Joe. The only thing your Party is good for is causing riots and mayhem. Look at Portland, Seattle, Chicago and all the other Democrat controlled cities. Disasters. People can’t live with the threat of constant violence.

Biden: I’ve been to Seattle and Chicago. Nice places. No problems there. Hell, there were a few peaceful protests and maybe a couple of shootings. So what? Ya gotta crack a few eggs to make an omelet.

Trump: Yeh, it makes sense if you want to destroy the country. You and Obama got a head start on that, didn’t you Joe?

Trump: You just want to extend the damage you and Obama did before I got elected. In fact, it’s why I got elected. People are sick of Democrats playing Russian Roulette with our future.

Biden: Hey… When Hillary was Secretary of State, we reset our relationship with Russia. Even gave them some kind of red reset button.

Trump: How’d that work out?

MG: With all due respect, gentlemen, let’s move on to some other topics. Let’s start with the COVID-19 pandemic, and what you intend to do about it. Mr. Biden, you go first…

Biden: Well, we’ve got to work with the Chinese. They know a lot about fighting that virus. Seems to me that we can work together to make this world a safer place. The Chinese are way ahead of us…

Biden: I know. That’s what I mean. They’ll know what to do about it. Keep a lid on it.

Trump: They kept a lid on that virus for months. Wouldn’t let their own doctors or local leaders even talk about it. They’re not the ones to solve this crisis. Hell, they started it!

Biden: That’s what I mean. They know how to keep the lid on.

MG: Mr. Biden, I don’t think that’s what President Trump meant. Do you think it was a good idea to withhold vital information from people about the virus?

Biden: Well, if it was going scare folks, why not. The government knows best. They had their reasons.

Trump: Yes, they had reasons alright… They didn’t want the world to know that they released a deadly virus into the world. Would spoil their public relations. Even tried to blame us.

MG: Let’s move on to the future. What would each of you do to prevent such a happening ever again.

Trump: Never trust the Chinese government. I got hoodwinked by Chairman Xi. Seemed like a good guy. But he’s got to toe the Party line… Just like Joe with his Democrats.

Biden: I resent that! I toe no line. I’m an independent man, trying to keep my head down until this virus thing goes away. That’s why I’m here in my basement. Hell, look at the nice paneling we installed a while back. [Biden pans his laptop camera around the room.] It’s real comfortable here. My wife even comes down to bring me supper.

MG: How are you spending your time down there, Mr. Biden?

Biden: Well… I have breakfast upstairs at 8:30 or so. I read the paper, kiss my wife, then go downstairs to get to work. I call my campaign manager to see what she’s got lined up for me. Then I talk to folks on Zoom, just like we’re doing now.

MG: What folks are you talking to?

Biden: You know… Regular folks here and there. Sometimes a Rotary Club luncheon. By about three o’clock I’m all worn out. Take a nap on my little sofa down here. Then I Zoom in on a few more folks and call it a day. Jill brings me down supper. I make a few phone calls to my handlers. Then I go upstairs to watch TV until I fall asleep.

MG: Mr. President, what about you? How do you spend your day?

Trump: I wake up around three in the morning… shoot off a few tweets, then I get dressed and get into the office early. Around seven, they give me my morning briefing about world events and what’s going on in the country overnight.

Then the rest of my day is nonstop meetings with cabinet officers, Senators and Congressmen. I make a lot of phone calls to governors to see how they’re doing. Problem is that the Democrat governors don’t want to talk with me. Hell, I don’t blame ‘em… with the kinds of disasters they let happen.

Around seven o’clock or so, Melania, Barron and I have dinner. (Can you believe that kid is taller than me now!) Then we watch a series on TV. Right now, Melania, Barron and I are watching a great little series called “Anne with an E.” Wow, that red-headed kid is smart! Reminds me of my daughter Ivanka when she was that age.

MG: President Trump and former Vice President Biden, our time is almost up. Before we sign off, now is the time for your closing statements. We’ll start with you, Mr. Biden.

Biden: Fellow Americans, elect me in November. I’m your last hope to get rid of the angst and turmoil that President Trump has caused the nation. If Trump gets another term, who knows what kind of mayhem our peaceful demonstrators will be inspired to cause. I’m the man who can bring peace and sanity to government. I’ve been in this racket for 47 years, so I know how government works.

With me, you also get a boatload of Democrats, chomping at the bit — ready, able, and willing to cancel President Trump’s tax cuts for the rich. (Hell, we’ll soak those robber barons when I’m in office.)  I will also bring…  [Biden looks confused.]

MG: Mr. Biden, you were saying…

Biden: Oh yes… Number one, I’m your man. Number two let’s get rid of Trump. And number three… [Biden looks around his basement bunker as in deep thought.] Oh, and number three, vote for me!

Trump: Thank you and your great publication, the Matrix Gazette, for the opportunity to debate my opponent, Joe Biden.  If you want to go back to the days of Barack Obama, Obamacare, and the sleezy Iran deal, then Joe is your man.

But if you want to get out of this virus-induced slump we’re in now, elect me to a second term so we, together, can get this country back on its feet, stronger than ever. Thank you and God bless.

MG: Thank you President Trump and former Vice President Biden for granting us an exclusive opportunity to hear your views, long before the scheduled networks debates in late September.

For the Matrix Gazette, we thank you, our viewing audience for sharing in this historic first debate between President Donald Trump and the presumptive Democratic challenger, Joe Biden.

(A short time later, Joe Biden climbs out of his basement bunker.)

“If I had intended to cheat, would I have been so stupid?…I value my word above all else.”

– Joe Biden, letter to Syracuse University College of Law after being caught plagiarizing from a published law review article