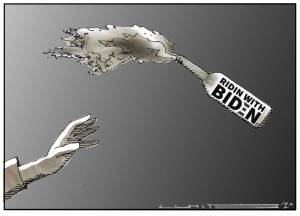 Here in the United States we’re not united. Government at all levels have imposed strict limits on our ability to go to work, to shop, to get a haircut, to dine out, to live a normal life. It’s starting to loosen up in some states, but not all.

The economy is in shambles. Businesses are going bankrupt. People are getting desperate. Can’t see our loved ones, close up and personal if they’re sick with the virus. People are scared. People are beginning to get angry. Some people are demonstrating in the streets and at Statehouses across the country.

The rest of the world has been going through similar convulsions. It might be useful to remember how this thing started…

How did we get here?

It started in Wuhan, the sprawling capital in Central China of 11.8 million people. It’s a huge hub of economic activity. According to its website, “Wuhan Tianhe International Airport handled 24,500,356 passengers in 2018.” It services 32 cities around the world.

Its “wet Markets,” according to National Geographic, “had a wild animal section where live and slaughtered species were for sale: snakes, beavers, porcupines, and baby crocodiles, among other animals.” Among those “others” were bats. It’s believed that COVID-19 originated from the sale of these bats.

With the incredible outreach of Wuhan as a transportation hub, it did not take long for this disease to spread around the world. The Chinese government, however, clamped down on news about the disease at the early critical moments as it was about to infect the world.

We know how to slow the spread of the disease by common sense personal hygiene and individual action to avoid close contact with those who may be infected. The information readily available and widespread. Yet, government at all levels has been working on the collectivist premise that people must be forced into compliance. They have been working on that premise for decades. But now, COVID-19 has given them the justification for the economic lockdown of the nation (and your life).

Where are we going?

That, my friends, is up to you. You know how to protect yourself from the catching COVID-19. But how do you protect yourself from the disease of government overreach?  If you remain silent in the face of more government control of your life, assumptions will be made by mayors, governors, and bureaucrats everywhere that it’s OK to continue controlling your life. Once they assume such power, it is hard to give up. So, expect more of the same for now, with gradual easing of the restrictions, but never quite enough.

To win this fight against government overreach requires long term thinking and planning, while doing what you can daily to make your voice heard. We still have a powerful weapon in this country called “free speech.” But the freedom of speech is never free. It’s paid for by using it!  You don’t have to be a great writer or speaker. All you have to do is speak your mind. Speak truth to power.

You can do this via emailed letters to the editor, social media posts, sharing this post and others, writing in your blog or for someone else’s blog, emailing your Representative, Senator, and the President himself. Do not let this amazing power of free speech get smothered by fear.

What can you and I do long-range? Eventually, this government lock-down will be over. Yet, the precedent has been established for local, state, and Federal governments to lock down our lives. We have got to chip away at its foundations. That can only be done by some serious intellectual power.

The battle we face against the enemies of our freedom cannot be won by force alone. We need the ideas that are the base of our freedom and that give us the moral certainty that we are right. If you want the most powerful ideas in freedom’s intellectual arsenal a good place to start is with Ayn Rand. More than any other writer and philosopher, she presents the moral and philosophical case for the United States of America. The underpinnings of her ideas come from Aristotle, John Locke, and other philosophers of freedom.

Read the great economists, especially Ludwig von Mises. Read history. Know what has shaped the world as we know it. Study political philosophy. Great thinkers provide the intellectual ammunition that you need for this war. When our tremendous physical power as a nation is backed up by the moral certainty that great ideas provide, we are unstoppable in our productive pursuits.

Here’s a powerful resource to get you started: 21 Websites to Help You Preserve, Protect, and Defend Your Freedom During and After the COVID-19 Crisis…

“I pledge allegiance to the United States of America, one nation, indivisible, under God, for real.”

– Presidential candidate, Joe Biden, reciting the Pledge of Allegiance at a campaign speech in Wisconsin, September 21, 2020.